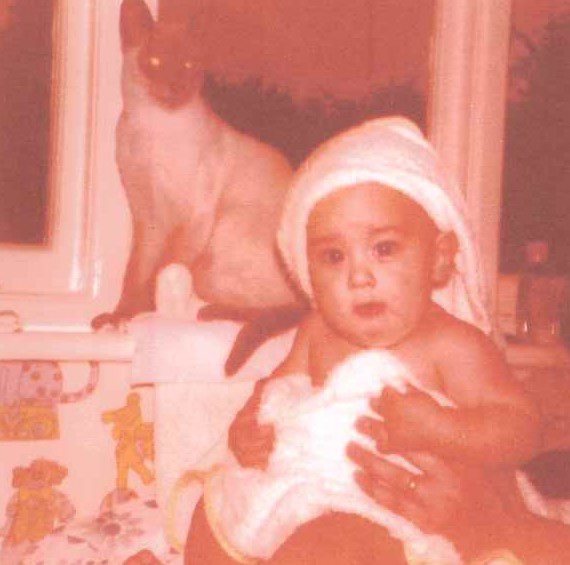 This lovely story has been shared with me by one of my clients.

Over fifty years ago a young couple, Pam and John acquired their first Siamese cat and called him Simon.

He wasn’t the best looking, and had been the runt of the litter. But what he lacked in looks he made up for in personality.

One Boxing Day, the mother-in-law, who hated cats, was visiting. Simon took the opportunity to inveigle his paw through the back of her chair and poke her in the back!

Simon loved to go for walks with the baby in his buggy. He didn’t need a lead, but would sit on the bus with the family, then jump off and walk to their parents’ house. He would play in their garden until John came to collect them all.

He had a special friend that they named Wirral the squirrel. Wirral was very friendly and came to the kitchen every day for a digestive biscuit. Wirral and Simon would play chase round the garden like a pair of cartoon characters.

Simon never killed a bird or brought unwanted visitors into the home. He liked to supervise the babies’ bath time, and would pick up anything they dropped.

When it was time to move house, he supervised the loading of the van from the top, then climbed into the cab to share the removal men’s ham sandwiches.

He regularly walked with Pam and the children to the village shops, and would sit and wait patiently outside. He walked with them for miles, and when he got tired, he would jump into the pram.

On one occasion Pam was walking with her two boys in the buggy. Out jumped a tramp from behind some bushes. Pam’s heart was racing as it was a very remote spot.

Suddenly a ‘lion’ jumped out snarling with his hackles raised, claws out, teeth exposed, launching himself at the man, who ran off.

Simon the Siamese had saved the day!

The family have had several more Siamese over the last half century, many of whom it has been my privilege to care for. But none have had Simon’s character.