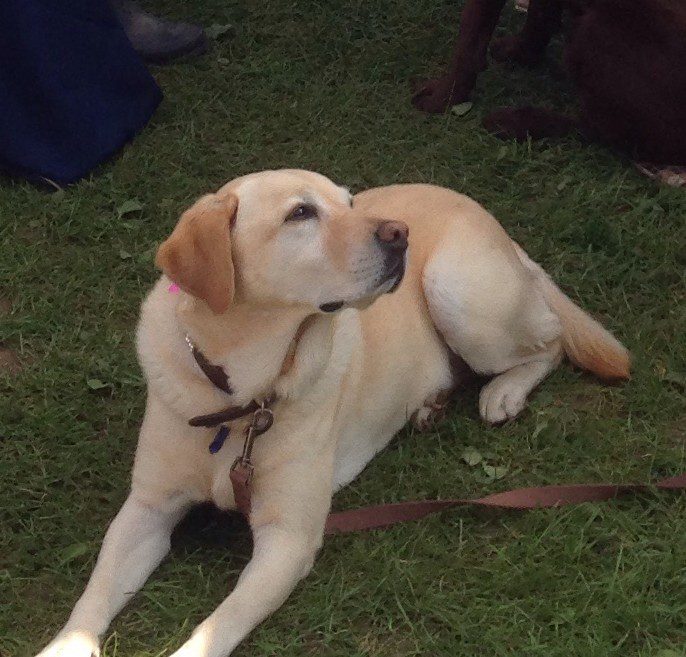 He had been visibly declining. The weight had dropped off him and he had started using the toilet as his personal drinking trough, which was not normal at all.

A simple blood test showed his kidneys were healthy and that the problem was diabetes mellitus.

Some families would find the expense and difficulty of administering insulin injections without fail for the rest of his life a daunting prospect. But Charlie’s family were up for the challenge. Four people in the family were willing to learn, so that there would always be one around to inject him at the right times.

We just had one further problem to surmount.

How do you teach four adults to give their first ever subcutaneous injection to a pet, without getting closer than two metres to any of them?

It fell to our RVN Emily, one of our diabetic nurses to resolve this one.

We could not have Charlie loose outside in our gazebo area, just in case he got a fright, and disappeared.

So we asked my gentle calm Labrador to step in once again. (Don’t worry – no Labradors are going to come to harm in this story!!)

Emily taught the principles of safe syringe, needle and medication handling from a careful two metres’ distance, in an outside space. And the family had had access to online videos as well.

But the important part of the lesson, first seeing the injection, and then demonstrating it back had to be done with Jazzy as the stand-in model.

We shaved a two inch square patch of her fur off at the scruff. This allowed the novice injectors to be able to actually see the tiny needle pass through her skin, and learn how this feels.

Jazzie barely felt a thing, she was so busy eating a regular supply of treats.  Emily supervised from the end of the lead as each of Charlie’s family had a turn at administering Jazzie with a drop of saline under her skin.

And they have been very successful ever since at safely administering Charlie’s doses at home.