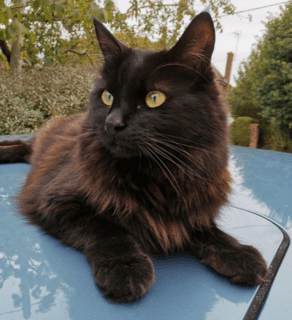 It was five minutes to home time.

It was the first evening in months where the special appointments that we save at the end of every day had not filled with urgent appointments and sick animals needing attention. But then the phone rang.

“Dora has just come in, and I can see there is something wrong with her eye.”

We asked her owner to bring her straight down.

Statistically, the vast majority of cats I see who come home winking one eye have scratched their cornea. It’s usually a cat fight, or a thorn that does the damage.

Luckily, Dora allowed herself to be boxed up, and arrived on our doorstep not long afterwards.

She was winking from the pain. But this prevented me seeing what I could do to help. I used local anaesthetic eye drops to allow her to relax. As the pain receded, she opened her eyelids enough for me to examine her.

Once the local was working, I had a little look around under the eyelids, in case of a foreign body. These are common in pet rabbits and guinea pigs, and in the summer in dogs’ eyes, but very rare in cats.

I was not really expecting to see anything unusual, when there it was – a dark slither of a shadow momentarily visible. “What was that?”

I went back again more carefully, very gently pouching the lower lid outwards to give me a better look. There was definitely something dark protruding where it shouldn’t be, between her eyelid and her eyeball.

Once I had my diagnosis, it was only a moment’s work to reach for some sterile forceps, and gently grasp the foreign body.

Out popped a leaf!

And not just a soft green leaf, but a nasty, crisp browning leaf, with sharp edges, one centimetre long. No wonder she had been winking!

I was anxious that her cornea might indeed have been scratched, and performed a fluorescein test to check how bad it might be. Luckily it was negative.

I couldn’t have been more delighted. Not only had I helped save Dora from a night of pain and distress, I could send my waiting team home almost on time.