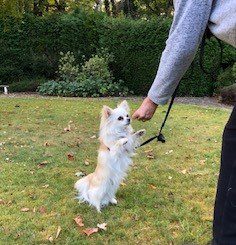 Once it was quite common to see small dogs that had to hop on their hind legs.

Thirty years ago, I even met a Jack Russell who preferred to walk in a handstand, because both his hips were so tender.

Many of these individuals were suffering from Legg-Calve-Perthe’s disease.

Luckily this is now a rare condition, perhaps because of better breeding decisions. So I was really surprised to find myself looking at an x-ray of just such a case.

We still are not fully sure why some dogs get this problem in their hip. It tends to only happen to small terrier and toy breeds. The bone of the femoral head (the ball part of the ball and socket joint) of the hip fades away on the x-ray, by a process called avascular necrosis.

To the pet this feels like many tiny fractures occurring each time he puts weight on it, which must be incredibly painful.

What was fascinating was that this pet, little Joey the chihuahua, had been in a dog fight, and his owner had been unable to prevent him being dragged briefly by the aggressor tugging on his right leg.

After the fight he seemed to recover from the wounds and the bruising, but then he went lame again on the right hind, and nothing we did seemed to help.

The diagnosis was straightforward once I saw the x-ray.

For once I was really sure what had caused this injury. Having his whole weight tugged along by his right leg must have disrupted the blood supply to the femoral head. The blood vessels failed to repair, and there was no oxygen reaching that part of his bone, which died.

He was lucky to have a caring owner, who was able to pay for me to remove the dead bone in a procedure called a femoral head and neck excision. That was three years ago.

Last week I was delighted to meet Joey again, and see how comfortable and agile he is now. It really lifts my spirits to know that I was able to give him back the ability to walk on all four of his legs properly again.