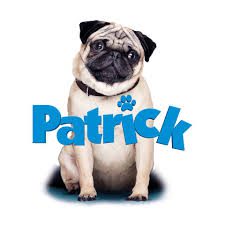 Have you seen the new movie “Patrick”?

I was lucky enough to catch it recently. It’s a delightful Disney tale about a spoilt lap dog being bequeathed to a hapless singleton. It even involves a socially inept but distinctly dishy vet.

The problem is that Patrick is a pug, and this has set the UK veterinary profession into a serious debate.

I am as susceptible as the next pet lover to the appeal of those lovely large pug eyes, and the soft snouted sweetness of his snuffly short face, but …

What is breeding for this humanoid baby face on a little dog doing to their welfare?

The Royal Veterinary College have just published a report looking into this important question. They got together experts from several fields to study of the short nosed brachycephalic breeds such as pugs, French bulldogs and English bulldogs when compared against more wolf-shaped long nosed cross-breeds.

It has long been thought that brachycephalic dogs suffer more with eye and breathing problems than longer nosed breeds. Vets were also noticing that they were having to perform caesarian sections far more frequently for brachycephalic breeders than others, which was thought to be due to the relatively dome shaped skulls on the pups making it much more difficult for some lady dogs to give birth naturally.

The Royal Veterinary College’s team looked at the statistics and confirmed that, for instance, out of 20,000 cases, a French Bulldog bitch is 15.9 times more likely to experience difficulty giving birth than a crossbreed bitch, and 2.4 times more likely to have a caesarian.

They have also recorded that a brachycephalic dog is 11 times more likely to suffer with a corneal ulcer on the eye, partly because they are so protruberant, and 3.5 times more likely to experience upper respiratory diseases, some of which require delicate and dangerous surgery to resolve.

So my message to you, should you be thinking about getting your first pup is, do go and see “Patrick” the movie, but before you and your family fall for the cuteness, come and speak to us first. My nurses would be delighted to help you with a considered decision about which breed to select. After all, your next pup should be with you for 12 to 15 years, and we all want their life to be as comfortable, and vet-free as possible!