Is it heat stroke? 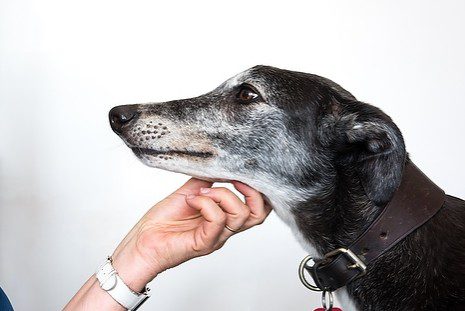 I was called to a dog show in progress on a fabulous sunny day.

Art, a black greyhound, was collapsed in a large puddle of water. He was laid flat out on his side, still breathing, but unable to even raise his head.

Before he reached this state he went through several stages. First of all panting but cheerful. Ears up, tail up, interested in what was happening around him. But as he became too hot the panting alone was not enough to cool him. Even being offered occasional drinks of water did not prevent him becoming listless and less interested, still panting and following along, but more slowly.

Eventually, he lay down and refused to move. At this point he was still conscious, panting but not especially interested as he should have been. His owner moved into the shade and gave him plenty of water, but he became unconscious.

They recognised this by the fact he was lying flat out, head down, eyes probably closed. But he was not asleep: when asleep, if you call your dog’s name he will open his eyes and lookup, at the very least. A collapsed animal cannot even manage that.

Whilst waiting for me, his family had been playing the cold water from a hose-pipe all over his body.

I had the advantage of being able to take Art’s temperature. He was two degrees below the norm! He was now chilled to the bone. I rushed him back to the Clinic to spend the rest of the day treating him for hypothermia.

The correct treatment was to move him into the shade and encourage drinking, if conscious. Cooling needs to be done gradually. Start with just wet towels dabbing at the relatively hairless parts of the body. The belly and under the ears are best. You can also dip the paws in shallow cool water.

It is then best if you bring him straight to the Vets, not wait for a visit – it is likely to be much faster.

Best of all, do not expose your dog to extended periods in the sun.