Sometimes a problem in the eye can’t always be seen 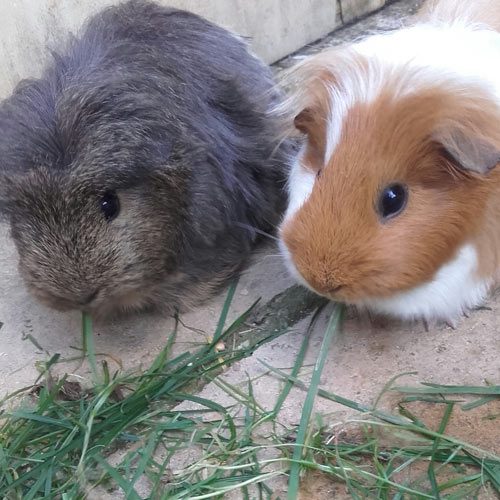 Guinea pigs are loving, gentle pets, and easy to keep.

I hardly ever have to examine one, as they suffer very little in the way of medical problems. But one day I had an appointment to see Rusty, who was one of a pair of lady guinea pigs, living a happy life in a hutch in her owner’s garden. Rusty was a short coated ginger coloured individual in the prime of life. She arrived in a cardboard carrier, with her companion, hidden under a deep layer of hay.

Rusty’s owner explained that she had noticed something was wrong with Rusty’s right eye. It seemed to be weeping, and turning grey. Luckily she had reacted quickly, bringing Rusty to me the day after she had noticed the problem.

I lifted Rusty from the box, spreading hay everywhere. We made friends, then I asked her owner to steady her whilst I got a good look at the sore eye. Sure enough, I could see that the cornea, which should be translucent, letting light through to the retina at the back of the eye, was damaged and opaque, giving it a greyish tinge.

With her owner’s consent, I applied local anaesthetic eye drops onto the surface of Rusty’s eye, and waited for it to work. Once it was numbed, I carefully picked up the upper eyelid to reveal a piece of hay that had got itself caught under the lid. With forceps, I very carefully eased it out, trying not to let my eyes water in sympathy.

It was a huge chunk, hard and spiky. It had been rubbing against the sensitive eye, causing terrible damage. If left in, it would certainly have resulted in the loss of her eye. And it was completely invisible to the owner.

I was still quite concerned about the damage done, so we used some eye healing ointment twice a day. I suggested the owner changed the hay to a less dusty source, and incredibly everything returned to normal in just a few days. Lucky pig!