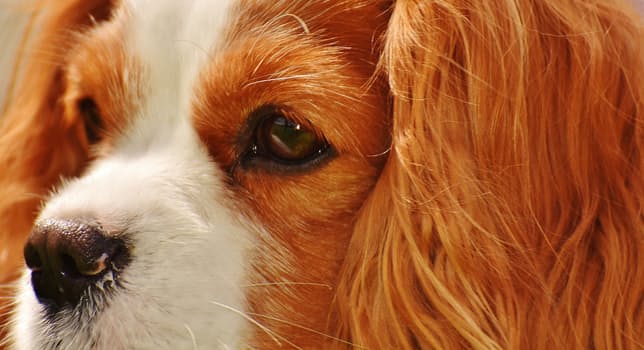 Shirley’s life revolved around her dogs. If anything happened to one of her lovely Cavaliers she was on my doorstep within the hour.

Daisy was unlucky to suffer from skin allergies. In those days we did not have the treatment choices that we have now, and Shirley and I took the decision to trial a course of corticosteroids to reduce the dreadful itching that she was experiencing.

We talked about the long term risks of steroids, including issues with the immune system, liver problems and old wounds re-opening (with many others, together described as Iatrogenic Cushing’s Disease). I also touched on the short term side effects, especially that she was likely to need more to drink and that she might be more hungry than usual.

We were not prepared for the effect the steroids then had on Daisy. Just a few days into her course her loving owners came home to find the kitchen ravaged. Three of the cavaliers were fine, but Daisy looked really unwell, and there was no lino left on the floor.

They rushed her to me, and I was able to immediately detect an extraordinary swelling of her belly in the area of the stomach. It did not feel like bloat, but I could not imagine how it had got so swollen. An x-ray showed a large number of odd shadows and shapes in her stomach and we knew an operation was needed.

I could not believe my eyes when I incised into her stomach. Out came slice after slice of neatly cut squares of lino. They were all almost identical in size, as if she had found the perfect shape to swallow. There were over 20 chunks, and it took a while to be sure they were all safely out. We discovered that her stomach had started to split where a corner of lino had got caught. We sutured the split area up and set Daisy on the path to recovery with our team of nurses.

Since then, I have never seen anything like it, and I certainly hadn’t had a case of the same nature before. I knew that steroids could cause an unusual appetite, but nothing as bizarre as this. To keep Daisy’s skin problems at bay, and keep her away from Shirley’s lino, we agreed to use a different pill!

Luckily for Daisy, Shirley was quick enough to think to bring her in. If you notice something wrong with your pet, especially if they have not long begun treatment for a particular ailment, please do not hesitate to bring them to see me or call a member of my friendly team on 01444 456 886.